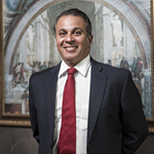 For 25 years he graduated in law degree and enabled since 1990 to practice advocacy, which does with zeal and honesty. In September 1987, as a legal intern until January 1990, and as of February 1990, as a lawyer, OTON NASSER provided attorney services for renowned jurists, lawyers, based in the state of Mato Grosso do Sul. In 2007 he decided to open his own office and joined forces with his father IVAN SAAB DE MELLO, who had been advocating since 2005. From that year, he established his headquarters in Campo Grande, MS, and acts on causes that process in the country and abroad.